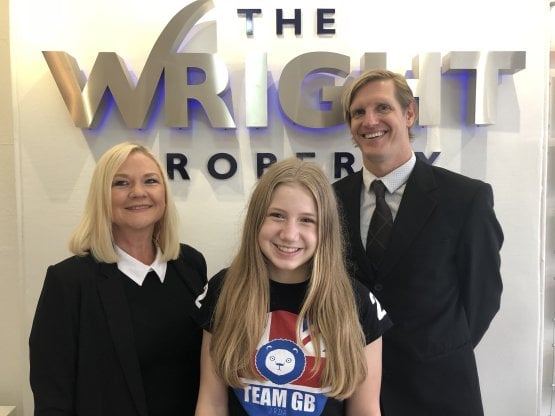 The Wright Property were visited by Izzy “Whizzy” Thorne, the Junior Roller Derby Team GB member. Meeting the office sponsoring her imminent trip to the USA for the World Cup, the Devonian athlete spilled the beans on the sport to Property Negotiator Miles Hamer.

Exeter College student Izzy, 16, is flying off to Pennsylvania in July to compete against the very best teams the world has to offer. A skater since the age of 10, her interest in the sport started on the recommendation of her Grandad, joining Barnstaple’s skatin’ & dancin’ group Born to Skate. The group soon gave birth to the Devon All Star Hitters, a team focussed solely on the hard-hitting sport for which Izzy is now representing her country!

How does it feel to be representing Britain? “Brilliant!,” came the short but enthusiastic reply.

Izzy won a place on the team via a simple, if vigorously judged, application process. “I applied, so did my friend Tegan, and Emily, who’s also in the team.”

The two day tournament kicks off late July, where Izzy will face off against teams such as USA East, USA West, Canada, Team Australia, and Team Europe. Going to a global level, the fledgling sport is just starting to burgeon in popularity.

“Junior Roller Derby is properly taking off. Teams have been getting bigger and they’re popping up all over the country. Now it’s a lot easier to get matches.” Previously, the level 3 skater had been travelling to counties as far as Hereford and Sussex for a tussle, but now with closer-to-home competition in the form of Exeter, there’s greater opportunity for local wars on wheels.

Is it a tough sport, we wonder? “Well, you can’t shoulder them in the face,” Izzy answers, referring to the blocker’s role in, well, blocking. “But there are injuries! Broken bones, and shoulder problems. Quite often, if a player gets hit in the shoulder it will pop out!”

Nasty. Do her parents worry at all about her playing the rough and tumble of the sport?

As indeed are we! Huge swathes of luck from everyone here at The Wright Property, and indeed, all of North Devon.

For more on the tournament, click here. And you can find the Devon All Star Hitters on Facebook.

Skating your way to victory on a global scale?

Or perhaps you just need help finding/letting property on a local one instead?

Then call The Wright Property NOW!

How much is my property worth?

Own a property and want to know how much its worth?

Want to find & contact your local branch of The Wright Property?